Once upon a time (1946) in a land far, far away (Caraffa Di Catanzaro, Italy), a little boy was born. His parents, delighted with his arrival, called him Giovanni and dreamed of only good things for his life ahead. Unfortunately, times were tough and with thirteen children to feed, hard work and long hours were a given. When little Giovanni was old enough he was sent off to school – but it was soon discovered that homework and studying were not his favourite things to do. Much to his mother’s dismay he would much rather be found playing a game of soccer with his friends and coming home late. In spite of this, he learned at an early age that one had to work hard to make a living – during the three month school holiday, Giovanni was sent to help his father harvest fruit on the farms on the outskirts of town, and when he was older he was sent to help his uncle out in his barber and shoe repair shop after school. Giovanni’s grades got so bad at one point that his mother decided to intervene. She started picking him up from school herself to make sure that he came straight home. Once home, she tied him to a kitchen chair with his book in front of him so that he could learn – but she would soon find him sleeping on the book.

When Giovanni was nine, his parents decided to move to Milan in search of new opportunities and a better life. After another three years of going to and loathing school, the twelve year old boy decided that he had had enough. He left school and got a job working in a bakery. After a few other jobs he went on to work at an engineer tool maker company and when he finally turned 21, he started his own company on the side. He would get up early in the mornings to work on his own projects, then work from eight to five at the tool maker company and continue his own projects until 11 at night. When he had saved up enough money, he bought his own lathe and opened a little workshop where he continued his early mornings and late evenings.

Inevitably, love entered into this story in the comforting surroundings of a Milan bakery where Giovanni spotted the lovely Maria and introduced himself. Although they didn’t start dating immediately they saw each other again a few months later, this time at the doctor’s consultation rooms. From there blossomed a beautiful romance and in 1970 this great love was solidified in marriage. Their first son, Luca, was born in the following year and four years later another son, Christian, was welcomed into the family. Life in Milan was hard, with long working hours and not much time for family. Giovanni knew that something had to change – there had to be a better life out there somewhere. And this is where our hard working hero’s adventure (and the brave quest into the unknown) really starts.

Journey to a far away kingdom

Giovanni had a nephew in a kingdom far, far away. The land was called South Africa and stories were told of wild animals roaming free amongst the inhabitants. Giovanni bravely said goodbye to his family and when he arrived at his destination was blown away by the absolute beauty of the surroundings. “What if I brought my family here?”, he thought. His nephew had opened a restaurant called ‘La Cantina’ in the city and he suggested that Giovanni follow suit – there was, after all, an opportunity at the Wonderboom airport café, and until that was sorted out, Giovanni was told that he could work at La Cantina. Our hero hasted back to his family in Milan to tell them about all that he had seen. In preparation for his new line of work, he attended a gastronomy course. He also went to the local bakery every morning before dawn to learn more about the trade. The baker was however weary of Giovanni’s intentions and refused to give him any of his recipes.

Giovanni watched everything closely and memorised as much of what he was doing as was possible. He would then go home and make notes of all that he had learned (he turned out to be an excellent scholar after all!). Maria was not so sure about the big move to this new kingdom Giovanni spoke of, but having good faith in her husband’s judgment, she agreed to the relocation. She did, however, have one condition: As they had no idea what type of furniture they would find in South Africa, they would buy everything for their new home in Milan and then ship a container with everything they needed there. Virtually all the Maiorana’s money was put into the preparations and all their possessions, new furniture, curtains, sentimental items, heirlooms and toolmaking machinery was put into a container. Giovanni enquired about insuring the container’s contents, but was assured by the shipping agent that R10000 would be more than enough – according to him piracy was a thing of the past and modern ships didn’t sink.

The brave family traveled to their destination by airplane and arrived there safely. Giovanni started working at La Cantina immediately, jumping in with both hands to start providing for his family again. After six weeks a telegram arrived – it might have been carried by a little blue bird… or an owl… or a postman. It is not known for certain, and quite frankly, it’s irrelevant, because the message contained in the telegram was of far greater importance. It quite simply stated that the ship had sunk and that the shipping agency was very sorry for the loss. (And now THIS is the part where you tick off ‘poverty / loss / tragedy’ in the list above.) Maria was devastated. They were stranded in a foreign country, couldn’t understand or speak English, had no money and had lost all their precious belongings. Giovanni knew at this point that there was no turning back, no plan B and no other alternatives – he had to make this work. He decided to see the blessings in the hand that had been dealt to them; the ship could have arrived safely whilst the airplane carrying him and his family could have crashed. And with this optimistic view on life he got to work. After three months of working at La Cantina, Giovanni moved to the restaurant at the Wonderboom Airport. He worked there as manager with the intention of obtaining shares as soon as possible.

Beating the odds with bread sticks

Giovanni flourished. Although he could not speak the language, the food was so good that people didn’t mind just pointing out their choices on the menu. Customers executed wine choices by walking to the cellar and showing the Italian what they wanted – a foreigner who struggled with English could hardly be expected to pronounce Afrikaans wine labels! Armed with the latest gastronomy from Europe, Giovanni impressed the locals with the unfamiliar tastes. News spread fast and the little café at the airport became a popular choice for anyone and everyone who heard about it. By the end of the year Giovanni attained shares in ‘Villa San Giovanni’ – and I’m pretty sure that by then the townsfolk were breaking out into spontaneous song and dance in the market as soon as the Italian restaurant was mentioned in conversation. After buying out his nephew’s share in 1983, Giovanni’s other partner decided to immigrate to England in 1985, leaving him as the sole proprietor of the airport restaurant. After this Giovanni had the first pizza oven built in the restaurant – authenticating the Italian heritage AND doubling the turnover in just two months. Once again long working hours were a given and even Giovanni’s two sons, Luca and Christian, were pitching in over weekends and holidays – both got on the team full-time as soon as they finished school.

Years went by and the Maiorana’s made sure that the restaurant’s look and feel kept up with popular demand. Several changes were made including minor and major revamps, extensions and additions. Today you can see Giovanni at the restaurant at any given time during the day, smiling contently in his surroundings, very possibly with one of his grandchildren perched on his knee. Christian and Luca can be found pouring their ideas, hearts and hard work into Villa San Giovanni, carrying on the family legacy of hard work and excellence. Christian’s three children (Christiana, Alessandro and Giovanni) are more at home at the restaurant than most kids are in a sandpit, happily riding their bikes on the premises, insisting on helping out from time to time or taking a nap under grandpa’s watchful eye.

Tanya Maiorana, Christian’s wife, has been running the Villa San Giovanni Hotel for the past 9 years, and is shamelessly praised by her husband for all her patience – few women would put up with a husband spending so much time at work! But somehow this family has managed to find the perfect balance between raising happy families, growing a successful business and enjoying every minute of it. It is evident as Christian speaks of the restaurant that the past 34 years is merely a beginning in his eyes – this family fully intend on celebrating Villa San Giovanni’s 50th birthday and taking Giovanni’s vision to new levels as time goes by, possibly even passing on this legacy to the next generation of Maiorana’s (who’s hearts evidently already belong to this business). All in all, it doesn’t get much more happily ever after than this, right? You might now say that I left out one very important element from our story. Where is the ‘magic’?, I hear you ask. My dear friends, fear not, for the magic is present in abundance. It is in every bite you’ll take at Villa San Giovanni and in every smile you see at the tables around you. Welcome to our Fairy Tale – Bon Appetit! 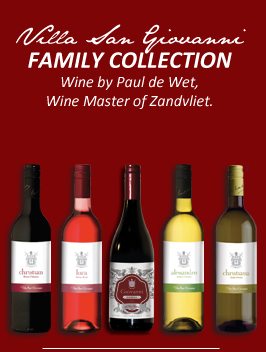